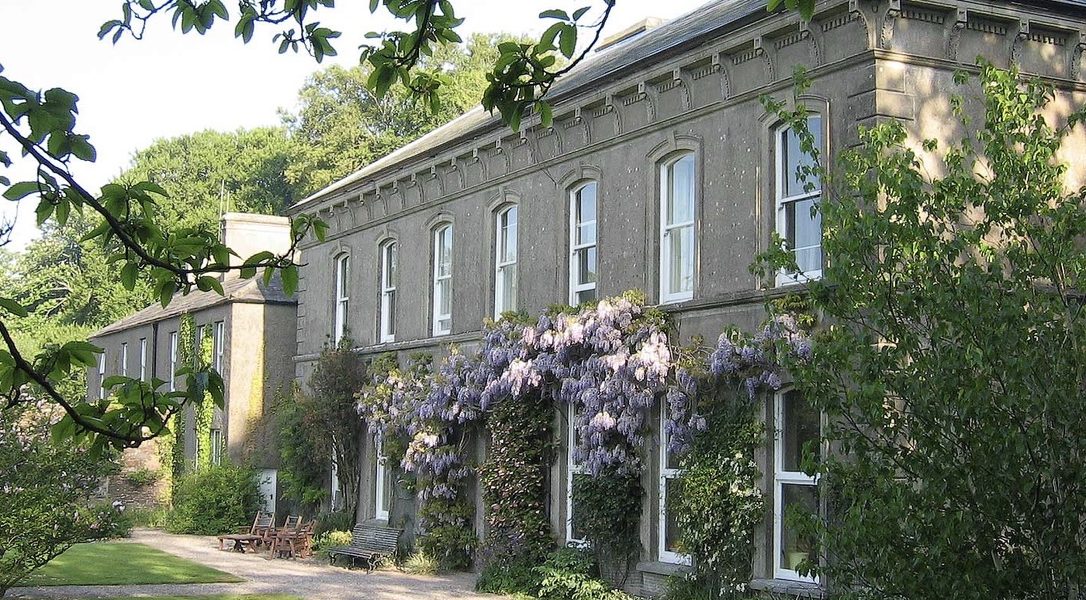 We arrived in Cork after a raucous time at a dumpy hotel in Clare, where the eggs were not things that could ever have come from a living chicken, and the sausages could never have been related to a living animal, but the Guinness was very good. Pulling up to the beautiful Georgian house in Cork was like arriving on another planet, with lavender in pots next to the pretty door, and cows in the front yard. A handsome young man opened the door and introduced himself as Eamon, the butler. The butler! Indeed!

There are no better words on Planet Earth on any occasion, much less after a confusing four hour drive on twisting Irish roads, than “Would you like some tea and homemade cake in your room?” It was bliss to sit in there, looking out over the rolling green hills and trees and cows, hands cupped around heavy white mugs. No delicate china for us! We stuffed ourselves and slept.

(That’s the tea and homemade cake…)

Eventually we awoke. It was the early evening-not dusk, because dusk falls at 10pm in Ireland in the summer. The day was soft and grey, and we walked the grounds of the house. In the garden, we stumbled on Eamon, who was pulling potatoes for dinner and was yet still spotless in his crisp white apron. He beamed at us. We beamed back.

Dinner, promptly at 8, was served family style a la Downton Abbey at the table with the other houseguests. Servers came bearing each dish, bending towards you as they explained what was in the offing. That first night, on one side of the table, our companions were a horsy couple from Yorkshire, and on the other, a well known fashion designer from London, her husband and two boys. I’ve never seen a truer display of English-Class-Distinctions-that-by-now-should-be-antique. Horsey man spoke about his triumphant catch of a grilse salmon that day, which are notoriously hard to hook, for they don’t feed when they go to spawn, while Fashion Designer’s Husband told us how much he loved New York, and asked us if we ever went to the Boom Boom Room at the Standard Hotel. Horsey Wife confided in me about a lost cat, and told me she’d love to go to New York someday. Horsey Husband declared he never would set foot in such a place! Fashionable older child explained his favorite gastro-pubs in London, and the history of the name “Robert” and Fashionable younger child never said a word. He was too busy plotting all of our untimely ends, I’m sure. Fashion Designer herself was lovely. Horsey Man and Fashionable Husband spent a good deal of time giving each other back handed compliments, which I suppose is the English way of disagreeing. “London’s too expensive for my taste, what?” (Horsey.) “Oh, living on the Dales must be wonderful, but I just can’t be away from the office.” (Fashion.)

Rob and I were both entertained. No one had a bone to pick with us, since we were somewhat acceptable Americans from New York. We didn’t speak much; the conversation was too funny and the food was too good. It was thinly sliced pink lamb, with a briny salsa verde, green salad and newly dug potatoes, all flawless in every way. Rob had turbot, since he doesn’t like lamb, which was his loss to be sure. The lamb was divine; sweet, and tender, and pale, perfectly offset with the cool salty green of the salsa verda. I could cry thinking about it.

The next morning, we arose ever so early to go fishing. After eating the best breakfast I’ve ever had in my life, we drove down to the river, with our guide. (I would describe the perfect scrambled eggs, the divine blood sausage, and rich mushrooms, and the amazing mustard pot with the tiny spoon that I kept waiting to get up and dance like the one in Merlin’s house, but I’m eager to get to the sandwich.)

Norman, the guide, was one of the last of a dying breed. A Brit born in what used to be known as Rhodesia, and is now Zimbabwe, to a military man, he had bad teeth, smoked constantly and drank his tea black with ten sugars. He had a dog with him, an old female mutt, who was obedient and loyal, and who was my companion for the day. We got our waders on near a small shed on the bucolic riverbank. We asked about the salmon Horsey Man caught the day before. Norman frowned and then ever so slightly grinned, “I caught that, he just brought it in, eh.” We smiled. It hadn’t been quite the success Horseyman had crowed about.

With a wink, he and Rob were off. The river was dark and deep, and I didn’t feel like fishing. It was a mild, cloudy day, and so I settled myself under a tree in my waders with the dog and my book, which was “The Way We Live Now” by Trollope. The hours passed, quiet but for the hum of the river bugs, the plink of the fly hitting the river, and riffle of the water, punctuated by the men’s hushed conversation. Once in a while the dog would look up to check on the men’s progress, and I would too.

Soon they were far away, down the river, casting and casting. And I was hungry. Norman had left the food bag, which was filled with foil wrapped sandwiches and cake and clear glass bottles of water and elderflower cordial. I looked back out at the river. It would be polite to wait. But I was hungry! They were engrossed, Norman quietly urging Rob, who was grimacing with the weight with his spey rod.

Needs must, as they say. I pulled out a foil wrapped bundle from the kit bag. It was just a sandwich. I was expecting a mushy mess, like most fishing day lunches. A dreaded tuna fish or squishy ham. And, indeed, it didn’t look promising upon unwrapping; brown meat with greenish white stuff on off white bread.  But when I bit in, heaven. It was the thinly sliced lamb from the night before, with a soft homemade mayonnaise cut with sharp cornichons, spicy mustard, and parsley. There may have been some crunchy green lettuce, perhaps even watercress. The bread, clearly fresh, was rich and crunchy and soft in the right way. It didn’t overwhelm. The proportions were perfect. (Like so much that’s beautiful in this world, a perfect sandwich comes down to proportion. Too much bacon ruins a BLT, after all. See also the turkey sandwich later on.)

I’m sure the fresh air, the dappled light, the purple flowers, and the peaceful setting helped. But it was the best sandwich I’ve ever had. I wish I could say I savored it, but I stuffed the whole thing down my gullet, like a hungry salmon. Soon, the men came back and ate theirs. Norman told a story about how he and his father started a nursery for brown trout, in a river in high up in the hills of Zimbabwe, and how there was still great fishing there. Rob doesn’t like lamb, so I can’t remember why I didn’t eat his sandwich. I wish now I had.

¾ cup mayonnaise (if you are ambitious you can make your own, but Hellman’s works fine.)

A teaspoon of capers (optional but nice for brininess)

Rinse the parsley leaves and the capers (if using).

Put parsley, mayonnaise, mustard and lemon juice in blender/mini-chopper. Blend until the parsley is finely chopped.

Add cornichons to taste. Blend until they are small but chunky.

Smear on any and every sandwich. Keep extra in a jar in the fridge for a couple of days. Also great as a dip for carrots or a sauce for potatoes or fish.